For details on our current JAMs and Justice Programs click HERE.

News & Opportunities from Our Fellowship JAMs

WHAT WILL HAPPEN TO PEOPLE WAITING FOR PAROLE? — A LOOK AT THE DEPARTMENT OF CORRECTIONS

WISDOM and its members are profoundly saddened and disappointed by the forced resignation of John Tate II as Chair of the Wisconsin Parole Commission.  Mr. Tate served our state honorably and well, and we are grateful for his service, courage and integrity.

Prior to the year 2000, people sentenced to prison were eligible to be released on parole, usually after serving 25% of their sentence.  For example, when a judge sentenced someone to 80 years in prison, it was assumed that the person could be released after 20 years – if they were able to show that they had completed required programs, had followed prison rules, and had taken the necessary steps for rehabilitation.  The job of the Parole Commission Chair is to determine if people have completed those requirements.  If they have, they are to be moved toward release.

In the decade prior to Governor Evers’ appointment of Chairman Tate, the will of sentencing judges was ignored, and thousands of parole-eligible men and women were denied a reasonable chance to demonstrate their readiness to be released.  Since John Tate was appointed, more than 500 men and women have been granted parole, in accord with the sentence originally given to them by a judge.  The vast majority of those released have re-joined the workforce and have become very productive citizens.  They have proven that their release was warranted, and probably overdue.

There are still thousands of parole-eligible men and women, all of whom have been in Wisconsin’s prisons for well over 20 years, who are still working through the process to be released.  The sudden decision by Governor Evers to force Chairman Tate’s resignation is a blow to those people and their families.  Many are concerned that fear of unwarranted criticism by political opponents will cause the Administration to revert to the days when only a tiny fraction of people ready for release were actually granted parole.

In the wake of this forced resignation, Governor Evers needs to make known his intentions.  Will his Administration continue to apply the law fairly, as has been done in recent years, or does he intend to adopt the posture of his predecessor?

*Watch for news soon how we plan to participate in the Fellowship!

When we organize, we build power in our communities for justice, accountability, and healing. In the last two years, UU the Vote has built new networks of spiritual and political communities to #VoteLove and #DefeatHate.

With UU the Vote 2022 we’re organizing on the state and local levels to fight for fair elections, advance voting rights, protect abortion access, and resist the targeting and criminalization of Black, Indigenous, and people of color communities.

There is so much at stake in the 2022 midterm elections. Together, our communities can address the current threats to our democracy and human dignity. Download our guide to get started. 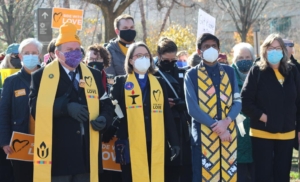 Minister Ali shared in a recent Sunday’s sermon a description of our UU faith as “one sacred love for all” and that, in the words of Dr. Cornel West, “justice is what love looks like in public.”  The Fellowship has Justice Action Ministry Teams as our framework for social justice work.  Our current teams are Immigration, Green Sanctuary, Essentials, Partner Church and an ESTHER JAM team which ties to ESTHER’s work on immigration, prison reform, transportation, environmental justice, mental health and antiracism.  Email us at justicehub@fvuuf.org if you would like more information about our current JAMs.  Do you have an idea for a new team you would like to see developed?  Email Doug Middleton at StartupJAM@fvuuf.org if you would like to talk about how to start a new JAM team. For an outline of the process, go here.

Consider attending one of the ESTHER regular meetings:

Get Zoom link by clicking on the specific task force meeting on the listing of upcoming events at this link: https://esther-foxvalley.org

After almost six years of dedicated work with our ESTHER organization, Bill Van Lopik has decided to step down at the end of this June from his position as its Lead Organizer.  ESTHER will miss this gentle man’s presence with his effective style of leadership. It was a leadership that flowed from his lifelong awareness, sensitivity and passion for marginalized people of society living under systemic injustices. Bill shared that unique ability to reach out to people, listening to them intently and making them feel welcomed in his presence. . .   We are grateful to you Bill, for making ESTHER a more respected organization state wide and especially here in the Valley. How good it is to know that you Bill, will always be near for needed justice work even in your retirement.

ESTHER is hiring a new lead organizer.  Applications are still being accepted.  See more information about description of the position and how to apply on https://esther-foxvalley.org

What is Love Calling You to Do?

UUA Side With Love Action Center Side with Love is a public advocacy campaign that seeks to harness love’s power to stop oppression. It is sponsored by the Unitarian Universalist Association and all are welcome to join.

Action Center is a place where we unite in work towards a world where we all thrive. Together we take action, Side With Love, and make deep impacts in this critical moment.

Will you join us?

Opportunities in the Wider Community

Give the gift of friendship and build a brighter future for a youth right in your community.  Matches play games, cook together, get outdoors, got to community events, and just talk and laugh.  You are matched to one youth and meet 2 to 4 times a month.

Would you rather meet with a youth during their lunch break at their school (during the school year)?  Find out more about the Bigs in School program at https://www.bbbsecw.org/programs/   Contact Jill Grambow at jgrambow@bbbsecw.org for more information.

View the Fair maps website https://www.fairmapswi.com  to find links for latest updates, to register or review the recording for any of the monthly zoom meetings held from 7-8 pm on first Wednesday of each month, find out about events, and to see your voting map.

“I believe that Wisconsin should have a level playing field and fair elections. That’s why, in 2022, I pledge to vote only for candidates who promise to support legislation to ban partisan and prison gerrymandering.”

As the situation in our community continues to change regarding the spread of the COVID-19 virus, we have new information that our staff has been in contact with people who are showing symptoms. We have no way of knowing if these people actually have this particular virus or whether staff has contracted it. In order to exercise an abundance of caution, we will NOT be having in-person Sunday services on March 15 as previously announced.

Rev. Christina will offer short worshipful services on Facebook Live at 9:00 and 10:45 am tomorrow.

For more information on how to connect on Facebook, via phone or in other ways, check out all of our updates on this page: